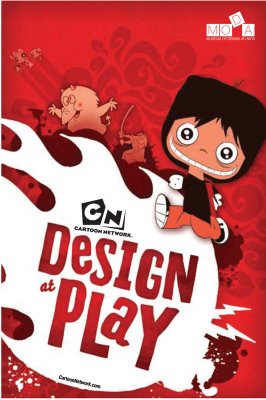 While Adult Swim's attack on Boston was thwarted, you can meet some of the terrorist masterminds at the Museum of Design Atlanta's Cartoon Network exhibition. The show opens tomorrow (Thursday) from 5pm-9pm. Unfortunately Adult Swim is not a part of the show, so no stuff from Aqua Teen Hunger Force or Frisky Dingo.

I have installed shows at MODA and despite Cartoon Network deciding that I didn't need to do the thing I do to earn money (I'll eat Ramen this month)... I'm not bitter. So, I will look at the art and drink their free booze (I hope it's free). For those who are looking to go, the museum is here... Google Maps.

No Matter What Kind, It's Usually Fun 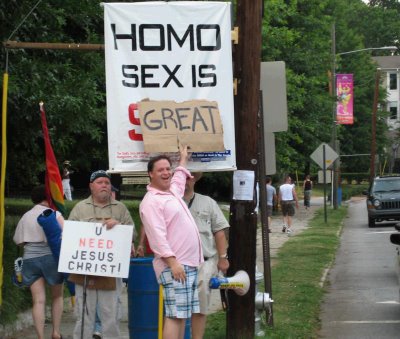 If you visited Nerve's sex blog Scanner you would have seen the above picture. It was a shot taken at the soggy '06 Atlata pride parade. The people at Nerve should have known better than to post an unattributed photo. So I'll let you know that it came from the A la Gauche: Political News and Commentary from the Far Left blog.

This Weekend in Culture: Movies, Monsters, Authors, Puppets and God

While handing me a book, she said, "Expand your brain but don't take too long it do it." My wife has been reading Female Chauvinst Pigs, and between her comments and Ariel Levy's appearance on The Colbert Report, my interest has been piqued. So I'll be reading that sometime this coming week. But quickly as ordered so the borrowed book can be returned.

As for what we did over the weekend, here's rundown:

Friday night, the good/not great movie Idiocracy and an unexpected viewing of Friends of God: A Road Trip With Alexandra Pelosi. Unexpected in that we planned diner and the movie at a friend's house and after "Idoicracy" she started up the Pelosi documentary. I had only heard a little about it on Ain't It Cool. Scary and intriguing.

Saturday night was spent in "Pan's Labyrinth". At Mid-Town Cinema the entrance sign to the theater just said "Labyrinth" having my wife sighed that she'd love to see the David Bowie movie up on a big screen. He was pretty dreamy back in the day. Still is, from what some of the girls are saying.

And Sunday it was "Tales of Edgar Allan Poe" at the Center for Puppetry Arts.

All in all, a nice weekend. We seem to meeting our goal of taking advantage of Atlanta's cultural offering's.
Posted at 6:20 PM 2 comments:

A Few Pictures Taken While out in Atlanta

Yesterday I went to to Youngblood Gallery to see the Ernesto Cuevas Jr. show. Bought a copy of Cabinet Magazine in their boutique store and took a couple of pictures in the neighborhood. 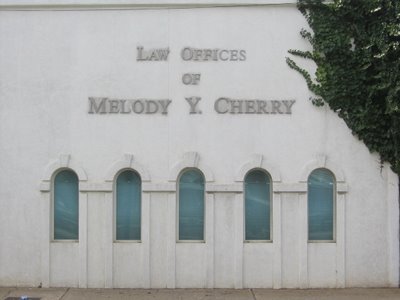 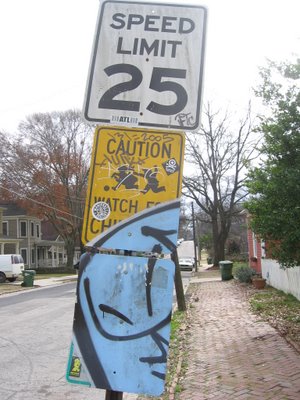 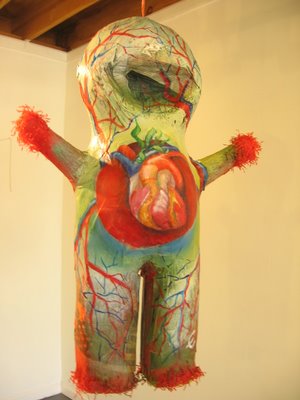 ATL at Sundance: "The Signal"

"This film will explode. Mark my words. It has cult classic written all over it. "

I was reading Ain't It Cool and found this review about The Signal. Made by the Atlanta filmmaking team of David Bruckner, Dan Bush, and Jacob Gentry it also has local actress Anessa Ramsey.

I'll be curious to see what happened to this movie. Anessa is one of the lead actresses, and a friend of me and the missus.
Posted at 7:28 PM 4 comments:

Meat: The Main Course - Of Course! 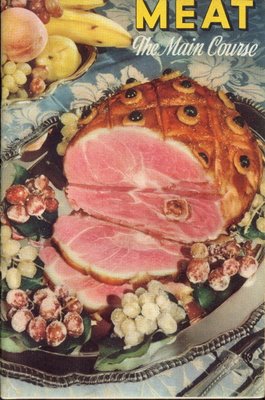 A 1942 guide to meats from the fine folks at Kingan and Co.

When I got my haircut in Dublin, Ireland, they played nothing but Elvis Presley.

I never got paid for posing nude once.  Even though I was supposed to.

As a kid my great-aunt would often give me a hammer and a mechanical alarm clock.  I would beat the hell out of it until I couldn't get loose any more gears or springs.  Hours of good fun.

As a young, angst-filled kid, sometimes I didn't like eating with my parents.  So, if we were at a restaurant and I finished, I'd always ask to go to the car and listen to the radio.  It was there that I got very skilled at turning on every button (sunroof included) with my toes.  I would also imagine our '84 Monte Carlo could launch satellite-destroying missiles.
Posted at 1:43 PM 2 comments:

... it was mainly at the expense of the activists that were in the room nearby. The "Change Bush Regime" activists.

Anyways, even though our fearless leaders weren't there, it was a great time. And a reminder of why these blogger meetups are fun to begin with.

Others who attended will blog more. All I have to say is, "2007 Teacher Sex-Scandal Pinup Calendar."

It's National De-Lurking Week. So leave a note. I am only validated by your comments and visits. I live and die by the number of visits to the blog and Flickr pictures. So, give me something to live for. It's all I ask.

And, there will be more posts coming soon.
Posted at 3:00 PM 4 comments:

I just started using my Christmas iTunes giftcard. I love music but find myself really reluctant to use any of the credits just waiting to be spent. It's free money, I don't know what the problem is. But I just grabbed my first album, a little known 2002 release by The Squire of Somerton. You don't know him, and that's a shame.

Here are some of the season's other highlights.

Animated adventures of failed super-scientist Doc. Venture, his bodyguard/Swedish murder machine Brock Samson and Doc's charming boys. Also include the mundane details of arch-villainy and costumed aggression. From my sweet wife who likes the show as well. 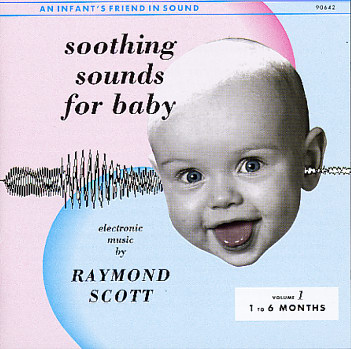 Raymond Scott's "Soothing Sounds for Baby" An ambient electronic soundtrack for child development, recorded in 1964. Raymond Scott created much of the music that ended up in Warner Bros cartoons of the 40's and 50's like "Powerhouse" and "Dinner Music For A Pack Of Hungry Cannibals." Just the guy you want influencing your child's young mind.

Interior Desecration's: Hideous Homes from the Horrible '70s and The Gallery of Regrettable Food by James Lileks. Mean things said about food and decor from the decades before punk rock and after the WW2.

A 1950's pamphlet on "Meat, The Main Course." An irony-free version of the Jame Lileks book. Needs to be scanned and shared online.

A damn sharp knife for the kitchen. An even more dangerous Cuisinart mandolin.