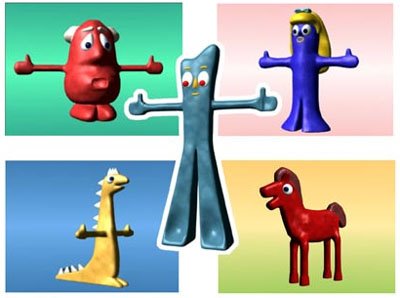 Gumby will be having his own retrospective in Atlanta. Starting the first week of August, the Center for Puppetry Arts will be displaying original props and models. Opening night will have rare movies and a Q & A with members of Art Clokey's family.

From the Center for Puppetry Arts' Museum Special Exhibits Page...

Fifty years old and still without a wrinkle, Art Clokey’s famous green clay character, Gumby, is here, complete with entourage. The pop-culture icon that ushered in stop-motion animation dresses up in shining armor to join the Knights of the Roundtable, gets suited up to set foot on the moon, and visits his long-time friend, Pokey, the amiable red horse. Clokey’s creation has spawned more than 200 Gumby television episodes, a feature film, and a video game and has been an inspiration to a myriad of animators, including Tim Burton. "
Posted at 7:37 PM